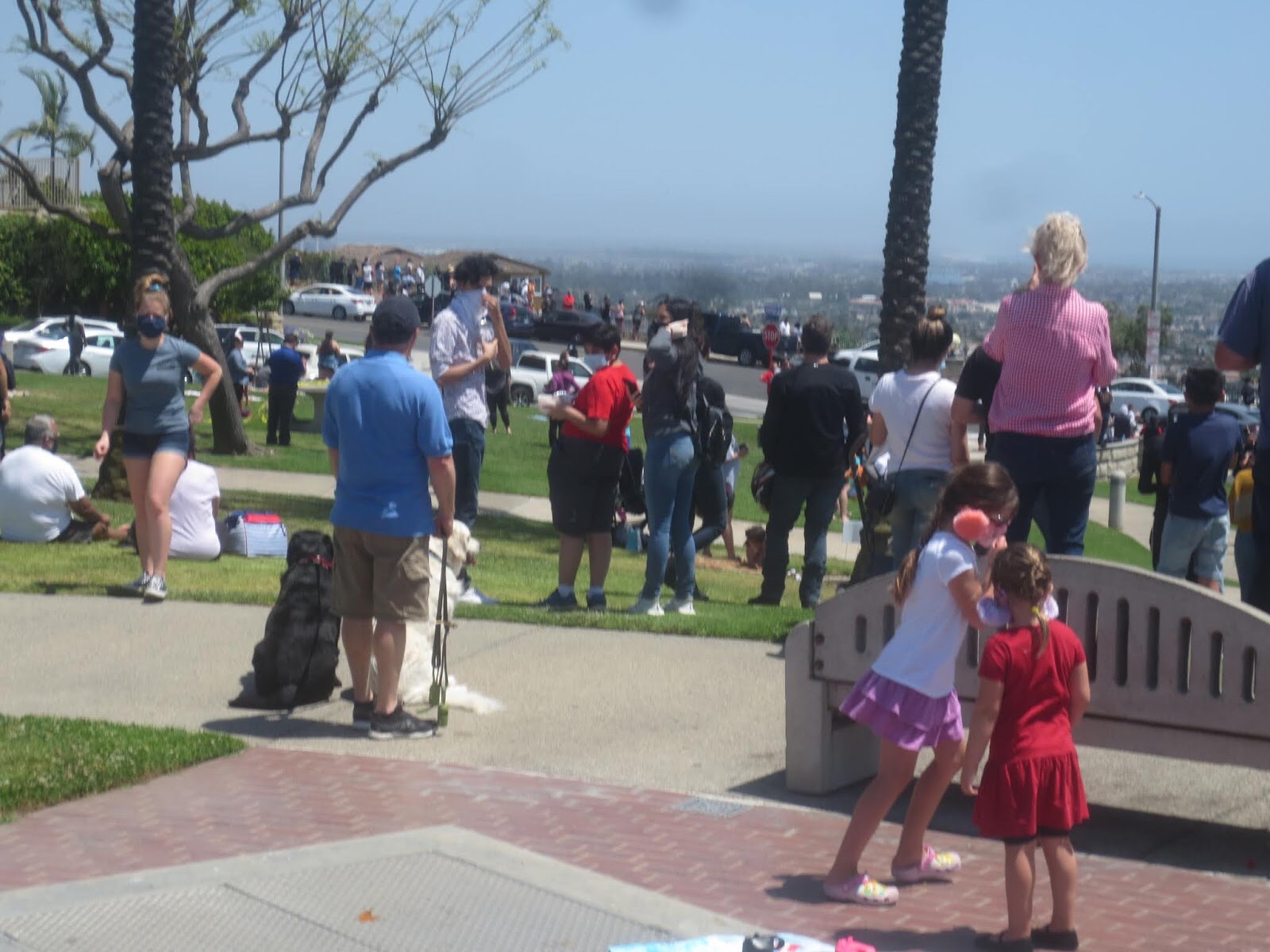 Several hundred locals gathered at Signal Hill’s open parks and adjacient streets, sidewalks and pathways Friday May 15th for a second possible glimpse at an air tribute from military fighter jets for frontline COVID 19 hospital workers. The Air Force Thunderbirds however never got close to the coast as they ditched the published flight path for a quick flight over L.A. then south again.

On Wednesday May 13 , four F-15C Eagle fighter jets from the California Air National Guard’s 144th Fighter Wing were scheduled to fly over medical facilities from Sacramento to the Bay Area then to Los Angeles and Orange County. Local news outlets included a Long Beach fly over time around 11:35 am.

On Tuesday the California Air National Guard updated the fly over route. The new route cancelled everything south of Santa Barbara. The next day on Wednesday, about 100 people who did not get word about the cancellation waited on Signal Hill with a crystal clear view of Downtown L.A. and the rest of the basin. Only a helicopter, a Southwest flight taking off  from Long Beach Airport and a couple of private planes were all they saw.

Thursday, news of the Thunderbirds L.A. Friday May 15th   flyover plans became public.  The published route showed the jets coming from the south over Orange County flying over downtown Los Angeles.  Looping over Santa Monica then down the coast over Long Beach, then back over central Orange County to Riverside County.

Despite the request not to gather to watch the salute from public viewing areas, Signal Hill’s three hilltop parks filled up with hundreds of spectators about an hour before the scheduled Los Angeles area arrival.  Unlike Wednesday’s crystal clear skies, on Thursday Downtown L.A.’s skyscrapers were barely visible through a thick haze.

Signal Hill Police kept watch over the crowd of spectators that for the most part were practicing social distancing with about 90% wearing face coverings.

More people stood across Skyline Drive on the paths and walkways of the ocean and harbor facing Sunset View Park expecting to see the jets fly south along the coast from their loop over Santa Monica.

Further south on Skyline Drive where it meets Temple Ave, more spectators stood along the street and at the 9-11 Monument at Discovery Well Park looking south towards the anticipated  Orange County approach.

At about 1:45 pm at Hilltop Park faint white spots in the sky headed toward Downtown L.A. as the jets let out a line of white smoke. In less than a minute, the jets looped around L.A.’s Downtown adjacent areas and then headed south where they came from.  Spectators on Hilltop quickly turned south for a return to the published route.

Many checked their cell phones to check the published route as they looked all over for the jets.  At this point all there was to see was empty an empty hazy sky.