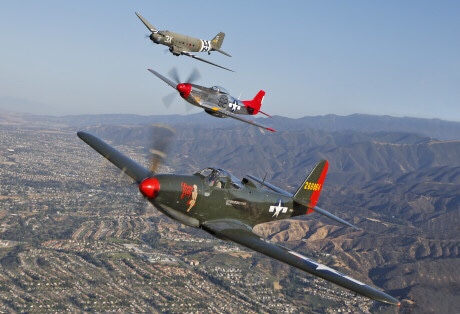 Three of the planes that will participate in the flyover: C-47, P-63 and P-51- photo courtesy of Palm Springs Air Museum

A squadron of vintage war planes from all over California will fly in formation over 19 local veteran’s landmarks, airports and hospitals to honor both veterans and  health workers in a Memorial Day salute on Monday May 25th.

The Long Beach portion of the flyover will include East Long Beach’s  Veterans Administration Hospital and Long Beach Airport and then flyover the Queen Mary.   From Long Beach the 18 plane historic squadron will fly to salute the S.S. Iowa in  San Pedro.

· The ten plane Inland Empire Wing squadron is part of  the Commemorative Air Force  based at Riverside Municipal Airport. The  Inland Empire Wing’s D-Day Doll, a Douglas C-53D manufactured in 1943 will lead the formation.

·  The five plane Civil Air Patrol Squadron 11 from the  Palm Springs Planes of Fame Air Museum, based at the Palm Springs International Airport,

·     A Douglas DC-3  from Flabob Aviation Associates based at the historic Flabob Airport  in Riverside. Nicknamed the Flabob Express the plane is a converted Douglas C-47.

The fly over Long Beach recognizes the area’s historic importance with the American defense history. The Long Beach VA Hospital opened in its current location in 1950. The hospital would be serving an influx of veterans from World War II who were moving into East Long Beach, one of the nations first planned community developments. Lloyd Whaley’s homes were targeted at housing the returning veterans, many who would become aircraft manufacturing workers. Built near the new hospital and a new university (CSULB) the homes of University Estates ( now Park Estates) and the Los Altos Village will also be flown over as the flyover squadron heads towards the Long Beach Airport.

During WWII the Long Beach Airport was home to the United States Army Air Forces after the Navy built Los Alamitos  Naval Air Station. The then Civil Aeronautics Administration took war time control of the airport in 1941.  The land adjacent to the airport was home to the nationally important Long Beach airplane plants of Douglas, later McDonnell- Douglas and then Boeing.

The Queen Mary  role as a troop carrier during WWII is also historically important.  Known then The Grey Ghost due to its wartime gray paint, the liner ferried troops, government and war officials of the Atlantic Alliance across the Atlantic Ocean between 1940 and 1944.

The  USS Iowa served in the Pacific Theater in WWII  and later in the Korean War.  After being decommissioned, it would again serve toward the end of the Cold War before its final decommission.

The vintage planes will meet over Riverside County shortly before noon on May 25th and end the flyover by 5pm. The specific times for the  Memorial Day flyovers for each of the 19 scheduled  places has not been released.

An opening ceremony of sorts can be seen on the Live Web Cam of the Palm Springs Air Museum starting at 10:45 am on Monday May 25. The web cast will include the Inland Empire Wing.

The formation will leave Riverside County at 12 noon and finish at 5 pm.