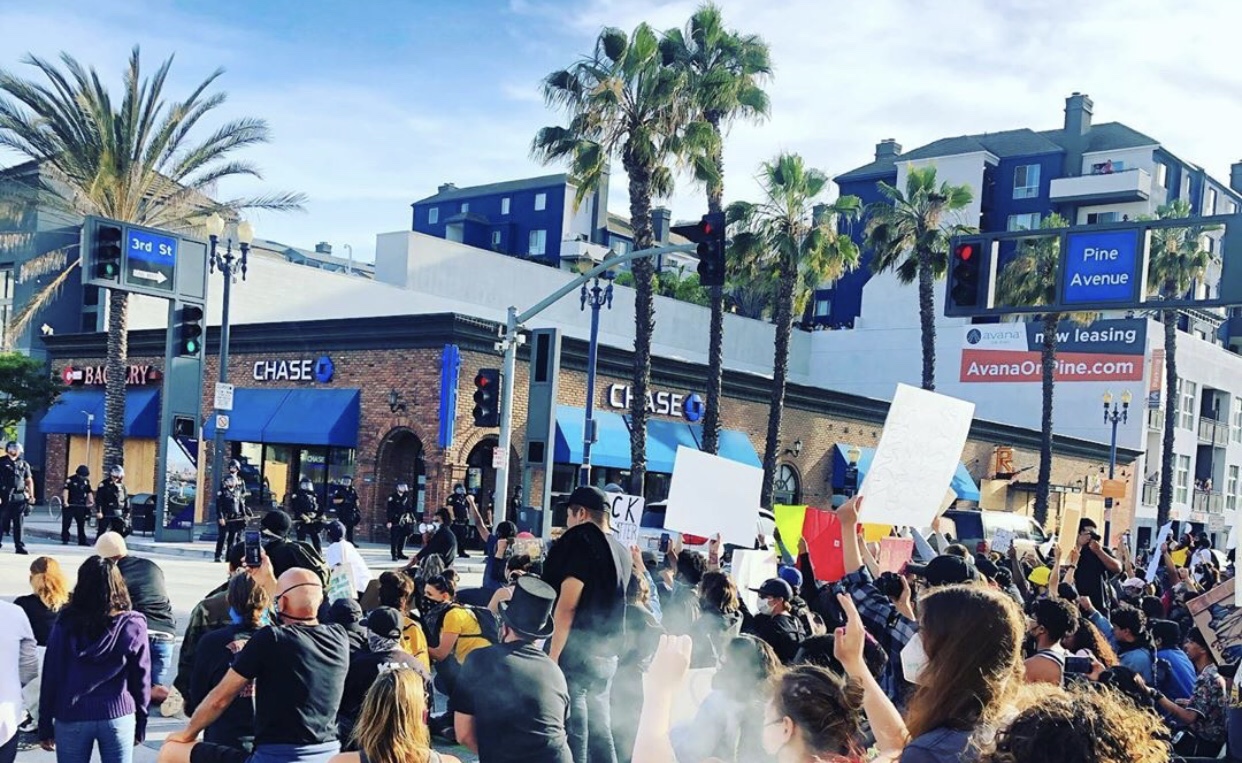 After a long afternoon of looting on Sunday, May 31st, Long Beach Mayor Robert Garcia in a 9 pm announcement told the community that Long Beach had requested and received from Gov. Newsom the National Guard. LBPD Chief Luna stated that National Guard was requested after no further mutual aid was available from the LA Sheriff and other agencies.

In the 9 pm announcement, Chief Luna stated that the city had been preparing for a peaceful protest for days, but that the Chief was surprised by the scope of the violence. Later in the evening, KNBC which carried the Long Beach press conference took Luna to task for his statement of being surprised as they covered the fire that broke out at Pine and 6th street.

Chief Luna who was interviewed earlier in the evening on KNBC  was pressed to explain why looters seemed to be ignored by the police.  Earlier in the day on live television, a KNBC reporter in the station’s News Chopper Alpha helicopter over Long Beach noted that the police were aware of the looting from the information on police scanner but could not send officers away from police lines for lack of police and for police safety.  In his evening KNBC interview, Luna had responded that protection of life took precedent over property.

The question Long Beach business community will be asking is how after the Saturday night looting in Los Angeles and the Sunday looting in Santa Monica starting as the Long Beach protest got underway was the LBPD caught by surprise? Shortly after the looting started in Santa Monica, the city announced a 4pm curphew and immediately asked for the National Guard.

In Long Beach, from small Mom and Pop stores to national chains, the looting was indiscriminate.  Stores and restaurants in the Pike Outlets, along the Pine Street corridor  and the downtown Promenade and adjacent streets were broken into and looted on Sunday afternoon while a mostly peaceful protest march returned to Downtown late Sunday afternoon.

Late Sunday night there were reports that looting had spread into North Long Beach.

The City of Long Beach’s response to a social media call for a protest of the George Floyd killing to begin at the Long Beach Police Department at 3 pm on Sunday May 31 was the barricading of the new Civic Center with Grand Prix track fencing.

The Long Beach Tribune was first to post about the planned protest on Saturday.  On Sunday numerous businesses downtown began to board up there windows.  However for some, like L’Opera, it wasn’t enough as protestors late in the Sunday protest ripped off the plywood protection and broke into the long time iconic restaurant and trashed the inside concentrating on the bar area and its liqueur.  That scene was repeated all along Pine Ave.

About 200 protestors arrived early at the Long Beach Police headquarters at 400 W Broadway and started marching east.  The crowd steadily grew as it marched down Broadway.

About the time that the Long Beach protest started, L.A. media began to focus on Santa Monica where dozen’s of looters not with the main protest group a few blocks away on Ocean began looting the 3rd Street Promenade stores and end mall.

In Huntington Beach in the 3 pm hour, the police declared an illegal assembly and closed PCH between Warner and Main Street.  Santa Monica announced a 4 pm curfew. They quickly broke up the several hundred protesters.

In Long Beach, at Cherry Ave, the protestors turned and walked the two blocks to Ocean to return to downtown. The crowd continued to grow into the thousands. The protest proceeded west on Ocean and at Alamitos stopped in the intersection and peacefully kneeled down symbolically. News of L.A. County Sheriff Villanueva plans to order a county-wide 6 pm curfew is announced in a television interview.

As the protest grew, the Metro system put out an alert that the A-Line (aka Blue Line) would not continue to downtown Long Beach but would stop at the Willow Station, then turn around back to go to Los Angeles.

At 4pm, while the Long Beach protest had grown very large but remained peaceful, Mayor Garcia announced an 8pm curfew. Long Beach City Manager Tom Modica then put out a statement that he has “declared a state of emergency” and echoed the Mayor’s curfew.

In the 5 pm hour looting started at the Pike Outlets.  The LBPD SWAT officers and vehicles responded.  The looters continued on the Pine Street stores in the Pike shopping area as the LBPD kept a line on Pine and Ocean.

LB Looting gets the attention of LA Media

During the 6 o’clock hour, Los Angeles media started to take note of the looting that started to spread out across the Long Beach Downtown including the Promenade and on Pine Street behind LBPD police lines. At about 6:30 pm the KNBC News Chopper Alpha flew over the downtown looting and noted the LBPD watching from afar and noted the LBPD radio traffic was well aware of the looting , but unable to respond for safety reasons.

In the 8 o’clock hour Chief Luna was interviewed by telephone on KNBC. When asked about the possibility of  the National Guard being sent to Long Beach like in Santa Monica, Luna  replied that while it is an option for the city, mutual aid has allowed Long Beach to help Los Angeles on Saturday night and mutual aid is helping  Long Beach handle the current situation.