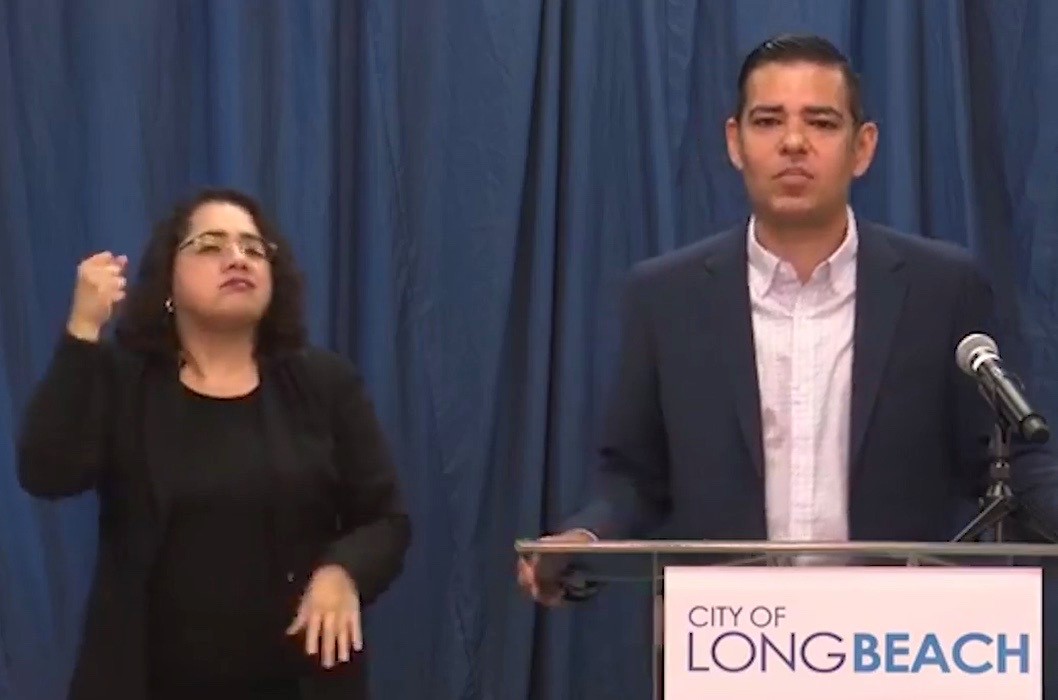 Monday, June 1st, city leaders, business owners, and residents fanned out across Long Beach to survey the damage, join in community cleanups, and comfort one another after a chaotic Sunday that saw scores of criminals strike across Long Beach, while again, taking advantage of a peaceful protest just as they had done the night before in Los Angeles.

The Mayor cited and praised the work of the police and fire departments citing the statistics that no one was killed, no police were injured and the city only had one major fire.

Mayor Garcia also addressed the widespread criticism that the National Guard was not called in early enough.  Garcia explained that the city must follow a procedure that requires it to exhaust help from surrounding agencies before the call for the National Guard can be made.

However, questions remained about the timing of the National Guard arrival in Long Beach especially when you compare the ease and the speed that other L.A. County cities acquired help.

After the third night of unrest on Friday, May 29th, Los Angeles Mayor Garcetti was asked at his Saturday, May 30th Community Update about the possibility of calling for the National Guard if the looting continued that Saturday night. Garcetti said that it would be unlikely the National Guard would be called. That night just hours after he made that statement Garcetti requested the National Guard help as protest crowds grew. By the time the looting started later that night, Gov. Newsom had already approved the request.

Santa Monica’s Sunday protest started at noon, three hours before Long Beach. Around 3 pm as the protestors were blocks away, criminal looters arrived at Santa Monica’s upscale outside shopping area the 3rd Street Promenade and the adjacent Santa Monica Place Mall. L.A. television and the Santa Monica Mirror newspaper reported that the National Guard began arriving in the city by 4 pm.

“All these steps are part of our staying vigilant and keeping the peace in Lakewood after the commercial looting that impacted parts of the city last night.“

In the briefing, Mayor Garcia also defended the police in addressing questions about police inaction toward looters.   The Mayor and the Police Chief both explained a perception of looting from the media.  The defense was that as the media shows the looting when it begins, it does not show the police arriving.

The Mayor further explained that the media shots of police standing near looting in progress does not show the full scene of what else is going on and why the police are making  “judgment calls” while multiple things are happening.

Chief Luna echoed those explanations and added a long-winded narrative about lessons on having too many officers visible people will want a confrontation with the police.  Luna explained that once people “attacked police officers” and started to destroy police equipment that resulted in action.  He went on to explain how the police did react to the looting at the Pike Outlets.

Los Angeles live helicopter footage did show a wider view of the looting in the downtown area. The KNBC News Chopper Alpha was flying over the Ocean and the Pine area.  As the LBPD came into the Pike Outlets from the west on Shoreline Drive, the looters left that area and then started looting the Pike Stores on  Pine Ave across from the Convention Center.  Looters were also seen on Pine Street as a line of Police stood near the intersection of  Pine and Ocean.  The reporter spoke in disbelief that the police were not reacting and reported that the police were aware of the looting as she monitored the police channel. The reporter gave the explanation that the police will not break the police line for safety reasons. The LB Tribune live updates of the protests included this update on that report:

Chief Luna also cited statistics for 911 calls.  Luna reported that on Sunday night the 911 calls quadrupled from about an average of 1,700 calls to over 4,600 calls for service.

In media interviews on Sunday, Luna had said the organized criminal element used calls for service as diversions in planned looting.

One statistic Chief Luna reported on after being specifically asked by a reporter was the number of people arrested. Luna stated that Long Beach Police arrested 75 people Sunday.

That Long Beach arrest number compared to other city’s is significantly lower.

In a Community Update on the violence to the 5th District, Councilwomen Stacy Mungo-Flanigan compared Lakewood and Santa Monica as she reported the LBPD arrests:

Almost six times larger than Lakewood and five times the size of Santa Monica. We are saddened by the destruction but thankful for our police and fire reporting out 75 arrests and limiting the 100 set fires to only 1 major loss.

During Monday’s briefing, Chief Luna defended his preparedness for the protests. Luna stated that his department was prepared for civil unrest and “anticipated but were praying it would not happen”.

Luna reported that as preparation for the protest he spoke with other police chiefs in cities a couple of times a week from around the nation including cities that had experienced the current wave of protests.  He said he learned from them about success and failures and how to deploy his officers.

The Chief blamed  “a smaller group of individuals who created chaos”.

Chief Luna explained his role and what happened: