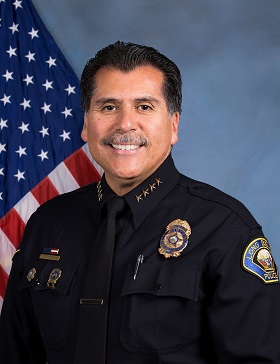 As I write this, I reflect over the last week and the peaceful protests that have occurred in Long Beach. I admire the protesters’ commitment to justice and equality, and I share in the outrage over the senseless death of George Floyd. Being a police officer has been my life’s work, and it’s sickening to see another sworn officer dishonor the badge by engaging in unwarranted and excessive force.

Peaceful is the word I would use to describe the start of Sunday’s protests. The clear majority of people who were out on Sunday afternoon were marching peacefully.

As guardians of this community, our goal is to provide a safe city for all people. On Sunday, that meant not only protecting our community, but protecting our police officers as well as the protesters. We did that by bringing in hundreds of additional officers, activating our department’s operations center and incident management team, and developing an action plan that included conversations with businesses, organizations and faith leaders.

All the while, we closely monitored the civil unrest taking place throughout the nation. We anticipated peaceful demonstrations, but also ensured plans were placed in the event violence occurred. Once crime and disorder broke out in Long Beach, we called for mutual aid from law enforcement agencies throughout the region, including the National Guard. Again, this was for the safety of everyone in Long Beach.

When a group of violent protesters began to break windows, vandalize businesses and loot stores downtown, we worked to contain the situation and minimize damage, while continuing to protect the 1st Amendment rights of demonstrators nearby. Calls to the Police Department increased nearly fourfold as opportunists took advantage of looting and burglarized and destroyed businesses that were away from the protest route.

It was gut-wrenching to see disorder and destruction in our city. But thanks to the coordinated efforts of Police Department, the Fire Department and our mutual aid partners, we didn’t see any loss of life or critical injuries. We also have our law-abiding protesters to thank. Their compliance allowed us to redirect police from crowd control, increasing our capacity to prevent further damage to property and stop people whose mission was to cause harm.

On the night of May 31, leading into June 1, we arrested over 80 people for offenses including looting, vandalism and breaking curfew—and more than 50% of those arrested were not Long Beach residents. However, in the true spirit of Long Beach, residents were out in full force the next day, voluntarily sweeping up streets, wiping down graffiti and lending a helping hand, alongside City staff.

While things could have been so much worse, I hurt for each business owner who now has to pick up the pieces and rebuild—while still amid a pandemic. Just as we do after every critical incident, my team and I will thoroughly debrief everything that occurred that night and we will learn from this last week’s events.

In the days following, 19 additional planned protests were held in Long Beach, ranging in size from 50 to 2,000 participants. These events included rallies, marches, sit-ins, car caravans, and motorcycle rides, and all required individualized response plans to ensure everyone had a safe environment to express their 1st Amendment rights. All of the planning, communication, and outreach paid off and we experienced no critical injuries or significant property damage in the neighborhoods and business districts surrounding the events. I am grateful for the community’s willingness to share their voices in a safe and meaningful way.

I must also take a moment to tell you how proud I am of the men and women of our Police Department. They worked tirelessly, 24 hours a day, sometimes in extremely tense and volatile situations, to protect our City and everyone who came here to be heard. Policing today is one of America’s toughest jobs, however, our employees are committed to serving our community with integrity and a respect for all.

I love Long Beach; it’s where I live, and it’s the city in which I have devoted my entire career. I believe in police reform and our Police Department has already made changes in the way we police our community, including implicit bias training, de-escalation tactics and a strong emphasis on community policing and partnerships. We need to build on our successes and look for additional ways to evaluate our policies, procedures, and training, using an informed approach which is comprehensive and evidence-based.

One loss of life, at the hands of another, is too many. That’s why I will keep working to enhance and evolve our methods of policing in Long Beach. And I want us to do it together. I am here for you and I am listening.