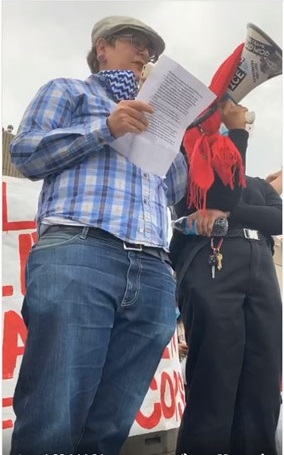 City Manager is months behind on reviewing Police allegations

The Long Beach Citizen Complaint Commission (CPCC)  will meet by telecast this week* for the first time since the civil unrest over George Floyd’s death at the hands of police. It is also the first meeting since the CPCC was thrust into the local limelight by CPCC Commissioner Porter Gilberg’s very publicly statement last week accusing the Commission of being a “farce”.  Gilberg made his accusation addressing a LB Black Lives Matter protest on June 5, 2020.

*(To participate in the CPCC June 11 live meeting or to make an  E-Comment see the information at the end of this post).

The CPCC meeting will come two days after the June 9, 2020 City Council Meeting where the Council voted to direct City Manager  Tom Modica to return with a report on the CPCC  to work toward reforms.

The City Manager CPCC reports  on Police allegations are months behind

Currently, four months of Commission Case Allegations have not been decided. Those cases involve dozens of LBPD officers. The numerous Allegations in those cases include multiple questions of Use of Force, Racial Bias, Racial Profiling, Sexual Misconduct, and a number of other misconduct allegations.

CPCC Manager Patrick Weithers eventually answered that he expected all this year’s backlog cases to be brought forward at the June CPCC meeting.  That answer, and the Weithers and the LBPD representatives convoluted answer on the status of the Commission questions and recommendations can be heard on the April CPCC meeting audio. You can access the exact remarks by clicking on the link below and selecting from the right side menu: REMARKS FROM THE COMMISSION AND CHAIR.

City Manager Tom Modica however only placed one of the current backlogged months on the June CPCC Agenda- January  2020.

The CPCC is neither an advocate for the complainant nor for the police personnel. Their findings can result in the accused personnel being disciplined, trained or exonerated. The Commission cannot, however, recommend discipline or penalty. While the Commission does not set policy, its findings have resulted in policies being changed or clarified to best serve the community.”

As the CPCC currently operates, the City Manager has all the power that most residents think lies in the actual 11 commissioners.  The City Manager serves at the pleasure of the Mayor and the City Council. The Mayor and all the members of the current City Council except Councilmember’s Jeannie Pearce and  Daryl Supernaw were backed in their elections by the powerful Police Officers Association (POA) which not only provides Law and Order photo ops for candidates it supports and money ( often unlimited Super Pac style, but also often has off-duty police officers going door-to-door to support a candidate.

Most of the CPCC Commissioners say very little and question even less during meetings (as seen with the May 2020 CPCC comment opportunity passed on by all but  Commissioner Gilberg)  When the Commission does have a commissioner like Gilberg or former CPCC Richard Lindeman asking the tough questions, the staff tries to respond. In response to the continued questions on the City Managers power in the Allegation cases, the CPCC Staff prepared a short presentation that included this clarification of the City Managers powers it presented at the December 2019 meeting:

The CPCC’s authority is only to provide recommendations on findings

• Once recommended findings are made, what occurs at the City Manager level is confidential

• The CPCC’s role ends after recommendations have been provided

• The above, coupled with legal constraints, makes it very difficult for the City Manager to fully explain all reasons behind their decision

A close examination of the CPCC process and the problems outlined by Gilberg in the 16 points list he presented at the June 5th BLM protest all goes back to the City Manager’s power over  the actual CPCC process.

One problem Gilberg highlighted was that many of the Allegation Cases are not even seen by the CPCC.   The City Manager through the now-defunct CPCC Executive Director position and replacement CPCC Manager can dismiss cases before the Commissioners even see them and know what they are about. Those cases are referred to as No Further Action (receive and file).   The Commission is not allowed to know or question what those cases are. They are however required to vote to approve those cases being dismissed (Consent Agenda). Commissioner Gilberg has consistently voted to Abstain on the item to dismiss those Allegation Cases. He currently is the only one to do so.

This is the 2020 Data on the CPCC No Further Action (receive and file)  cases, the City Manager Reports, and the types of  Allegations that are in the cases. The hyperlinks go to the documents where the data was collected:

7 Allegation Cases; Including Use of Force

Forwarded to Acting City Manager Tom Modica for a ruling;

Acting City Manager Tom Modica returned 3 months of  rulings on the Commissions decisions to the CPCC made in September 2019, October 2019, November 2019;

8 Allegations; Including 2 Allegations pertaining to Use of Force; 1 Improper Arrest

Forwarded to Acting City Manager Tom Modica for a ruling:

12 Allegations including  Use of force ( 2 cases with several officers); Sexual Misconduct; Improper arrest; Bias Based Policing

Forwarded to Acting CityManager Tom Modica for a ruling

15 Allegations including: Use of Force; Misappropriation of Property; and misuse of Authority

The Agenda does not have any presented. The CPCC website link for a March 2020 City Manger Report links to the December City Manager Report.

7 Allegations including  Use of Force; Bias Based Policing; Misappropriation of Property

Forwarded to Assistant City Manager Tom Modica for a ruling

6 Allegations including; Use of Force; Improper Detention; Bias Based Policing; Improper Arrest

5 Allegations including Dishonesty and Misuse of Power

Forwarded to City Manager Tom Modica for a ruling

14 Allegations including Use of Force (several officers)  Improper Arrest; Dishonesty of Officer; Sexual Misconduct; Misappropriation of Property; Bias Based Policing

As I was while a CPCC Commissioner, I spoke out about TRANSPARENCY. I hate to say that since July 2019, that there has been less transparency from the City Manager’s office than ever before. In the Eleven months of this board’s meetings there have been only TWO City Manager’s reports, one in September covering June 2019 and then October covering August 2019. At both meetings there were 8 Sustained recommendations by the commission which in both months, NONE were Sustained by Assistant Manager Jackson, with NO explanation and there has been repeated questioning since that time, with NO response. I am surprised and disheartened that neither of the Chair’s have raised much interest in this Problem. Just for clarity, on the agenda it has Manager’s Report, which really should read Director’s report, since there are NO MANAGER”S REPORTS. The CPCC is a Charter Commission and as such should be treated with respect. IF NOT, then it should be Disbanded as a total waste of time and energy!

Forwarded to Acting City Manager Tom Modica for a ruling

Visit Meetings Live on the City of Long Beach website or