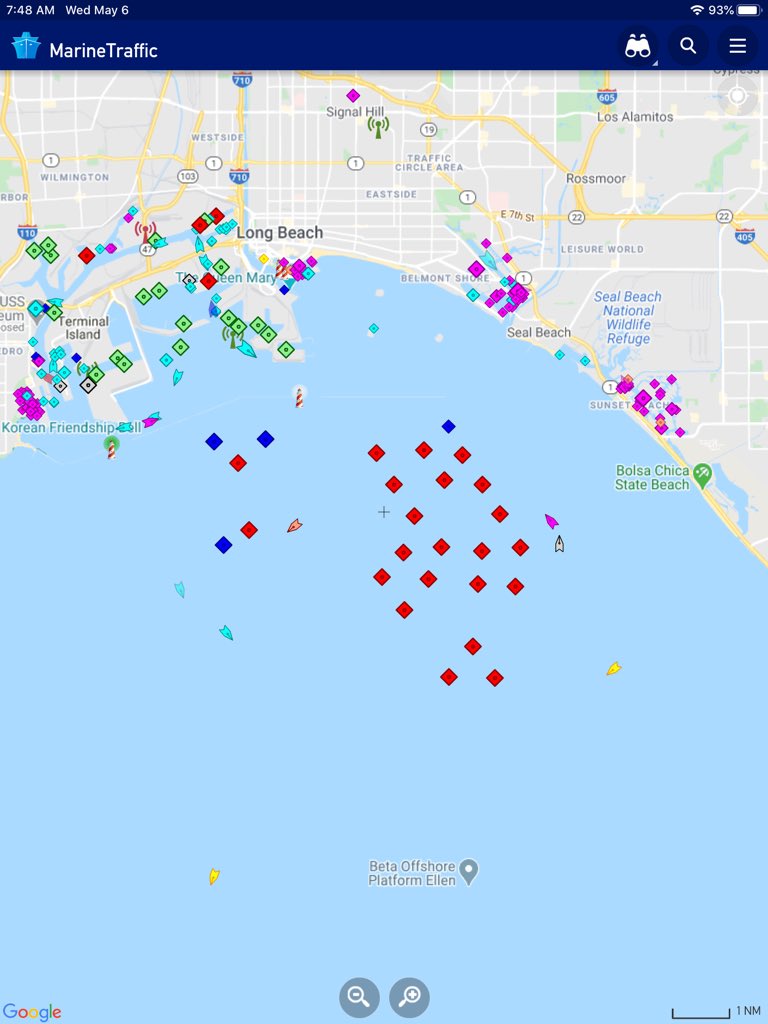 The COVID-19 Stay-at-Home Orders brought empty freeways as Los Angeles watched the Highway Patrol hunt down triple-digit speeders. The local and national news was full of glowing reports of the L.A. Basin’s COVID-19 related air quality improvement from the lack of bumper-to-bumper traffic.

While the news media cheered the  “clean” air due to the reduction of motorized transportation, another polluter in great numbers arrived off the Long Beach coastline.

Inside the Long Beach/L.A. breakwater,  up to 22 oil tankers and two chemical tankers became anchored as floating storage facilities.  Local media featured pictures of the anchored tankers. From the parks on the top of Signal Hill to the apartment towers in downtown, people took pictures of the idle tankers and posted them as COVID 19 inspired social media buzz.

What our local Air Quality Control District (AQMD) and the Long Beach and Los Angeles Ports did not tell us was that the 24/7 idling fleet of tankers was sending a toxic mix of pollutants over Long Beach and the surrounding communities.

It took a university 5400 miles away in the United Kingdom to do the analysis of the pollution released by the tankers over  Long Beach. That analysis was performed by Dr. Tristan Smith and  Camilo Velandia Perico from the Energy Institute of the University College of London (UCL). Their research was shared with the National Geographic that reported on the UCL findings on June 6th.

According to the  National Geographic article titled As oil prices crashed, tankers idled off California—spewing pollution for weeks,  the24/7 idling fleet of storage tankers each day released these pollutants over Long Beach:

·      a quarter ton of sulfur pollutants

The National Geographic summary of the UCL analysis  data includes this information  putting the UCL data into perspective:

“The tankers’ PM2.5 emissions amount to a third of what the Port of Los Angeles, one of the largest sources of pollution in the city, produces on an average day.

The ships also pumped out up to 600 metric tons of CO2 each day—equivalent to 68,000 daily car trips for Angelenos. That’s small relative to global annual carbon emissions, but every bit of carbon not added to the air helps in the bid to stabilize the planet’s climate.”

As the COVID 19 Stay-at-Home orders caused a record drop in energy demands, oil continued to be pumped and needed to be stored.  By early May 2020, storage facilities around the world were near capacity.  In a May 4, 2020 article by Oil and Gas Facilities  it was reported :

“Major oil storage firms are either at or nearing their capacity limits. Vopak, the largest independent oil storage company in the world, told various media outlets in April that available oil capacity is almost completely sold out.”

In the U.S., oil trade groups began filling up empty oil pipes, railroad oil cars, and oil tankers. The oversupply and lack of storage forced oil companies to charter oil tankers to store the oil. The “storage tankers” were anchored off the coasts of major ports around the world. April was the height of taker storage off the coast of Long Beach with 22 oil storage tankers and two chemical storage tankers.

Over the following weeks, the number of tankers fluctuated, dipping down to 19 at the end of April and back up to 23 in early May. Only by mid-May did the numbers dip to the low teens, where they have stayed since. But if the UCL data can serve as an upper estimate, then the extra oil tankers may have added up to 15,000 tons of planet-warming CO2 and 7,250 pounds of lung-harming PM2.5 during their month or so of idling.

Container ships far out to sea are powered by the world’s dirtiest fuel “heavy fuel oils”- basically the oil that is left over after making other petroleum-based fuels like gasoline and jet fuel.  They are described in the National Geographic article as:

“…thick with sulfur, heavy metals such as vanadium and nickel, and a suite of other contaminants that, once burned in an engine, combust into fine, lung-damaging particles.”

The heavy fuel is so toxic that when ships get within 200 miles of the coast they are required to switch to a less toxic fuel- the second dirtiest fuel in the world. The second shipping diesel fuel has less sulfur than the heavy fuel oil but is still 67 times dirtier than truck diesel and 100 times dirtier than gasoline according to the National Geographic.

Dirty fuel from both diesel trucks and ships was a catalyst for the Port of Long Beach adopting its “Green Port” initiative in 2005. Part of that initiative was by 2020 to install the whole Long Beach Port with electric shore power available to all container ship berths. The shore power would allow ships to run their idling auxiliary engines with electricity instead of the shipping diesel.  When a fleet of 24/7 idling storage tankers is off the Long Beach coast,  those Green Port initiatives are offset.

The National Geographic article quotes numerous studies and health experts on the impact of the Port and shipping fuels on air quality.  In one passage Dr.Yifang Zhu from the UCLA Fielding School of Public Health notes that port pollution is an environmental justice issue:

“The nearby communities are exposed to so many pollutants from ships and trucks, and the effects are very clear,” she says. Among them, more preventable lung and heart disease, an increased risk of diabetes, and higher cancer rates”

Dr. Yifang Zhu’s assessment is even more poignant when we look at the disproportional impact of the COVID 19 pandemic in the United States on minority populations. An impact the American Medical Association describes as an “egregious impact on minorities”.

The  American Lung Association (ALA) grades Los Angles County with a minority population of 7 out of 10 million an “F” in air quality that affects lung diseases.  The ALA also reports about the risks of  minorities:

The sight of  dozens of idling storage tankers in the Long Beach Harbor were, like many things in 2020 have been, something hiding in plain sight.  There in plain sight was an example of the environmental justice issues of COVID 19  and Black Lives Matter merging in Long Beach.