37-year-old man, a father of two minors, is lucky to be alive today following the incident that happened earlier this month in his home when he collapsed in the basement from a medical event that caused him to slip in and out of consciousness. Fortunately for him, his stubborn 6-year-old daughter refused to go to school that particular day and saved her dad’s life by unlocking his cell phone and calling the local police department.

According to News 25 that got in touch with the family and reported about the story few days ago, the incident happened on April 12 in the family’s home. On a normal day, the 6-year-old Macie would have been at kindergarten, but that day she stayed home with her father and 4-year-old brother Caleb after constantly refusing to even dress for kindergarten that particular morning. The 37-year-old father, Kyle Semrau, had nothing against spending a whole day with his children after an overnight shift, even though he was feeling light-headed.

Later in the day, the little girl’s stubbornness and her parents’ decision to let her stay home ended up to be a life-saving decision.

According to Seacoast Online, later that day Kyle collapsed from a medical event that caused him to slip in and out of consciousness while he was in the basement in their Maine home. Macie, who heard her father yelling, knew he was in danger and immediately ran to the basement. At the time, Kyle was still drifting in and out of consciousness and in a moment when he was conscious, the girl asked for her dad’s passcode.

“I remember giving her my passcode, as I was in and out of consciousness. I was having a really hard time breathing. It’s insane,” Kyle told News 25. “I still have it saved. If you open up my browser [that’s] the way that it is spelled, ‘poliz.’ When I asked her what she pushed, you see the call button, which actually goes right to the dispatcher here in town,” he added.

The quick-thinking Macie remained completely aware of the situation and unlocked her father’s phone, opened the Safari browser and googled the local town police department’s phone number, called the business line and relayed the pertinent information to J. Smith, the department’s administrative assistant.

Two minutes after Macie’s call, first responders arrived at the address. Kyle was transported to hospital for treatment where he was given four liters of oxygen and spent three days recuperating in the hospital. While he didn’t specify what particularly happened that day, Kyle explained that the incident involved issues with his sinuses, which led to difficulty breathing and remaining conscious.

While the little girl was trying to get in touch with the local authorities, the 4-year-old Caleb also went to the basement trying to console his father.

“If I can say anything about this whole experience, it’s for everyone to teach kids about awareness. If I hadn’t taught my daughter certain things she wouldn’t learn in school, this outcome could have been completely different,” Kyle reportedly said via Facebook Messenger. “She is, and will always be my hero.”

The incident occurred exactly a year after Kyle’s wife’s grandmother died, causing the family to pause and wonder about the unfolding of the day’s events.

70-year-old school bus driver is accused of taking 139 ‘upskirt’ photos of unsuspecting pre-teen and teen female students when they entered or exited the school bus, videos found on his phone 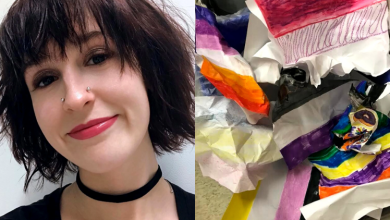 Middle school art teacher, who let her students create art expressing their own identities and hung the artworks on her classroom door, claims she was fired because she discussed gender identity topics with the students